Why ‘Rockets’? (and what they were before?)

Such a deceptively simple question – so devilishly difficult to answer. All the more surprising because there is a considerable percentage of the town’s current population that was here at the time, and should know.

Why is the Needham High School team called the Rockets?
And what were they called before?

Most Needhamites surmise that the team is called the Rockets in honor of the Nike site. This, in fact, turns out to be…true. The Nike installation was completed in November, 1955. Sometime between then and the 1957 football season the team took the nickname Rockets. When exactly is not clear, but the name is not used in the 1956 yearbook. (BTW, in 1955 a Nike site was also constructed in Reading, and their football team also took the name Rockets).

What were they before? As far as we can tell, they were not called anything – just the Needham High football team. The yearbooks and newspapers refer to the team on occasion as “the Hill-toppers” or “the Blue and White,” but these seem to be more informal designations, like The Olde Towne Team, or the Bronx Bombers.

But maybe the new name had some appeal because it was already familiar – there was an earlier Rockets team in Needham. In the 1930s (give or take), a local semi-pro hockey team called itself the Rockets – presumably inspired by the speed of Robert Goddard’s new invention. 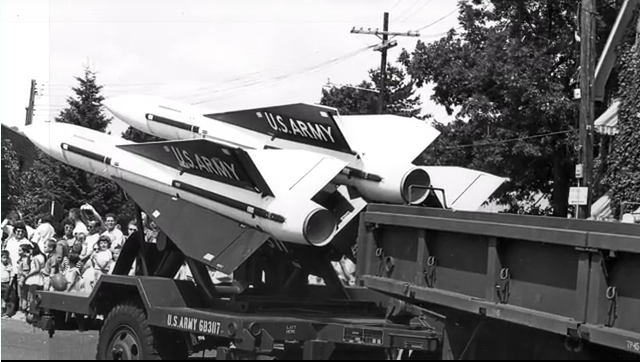 Leave it to the Boosters Club to enhance the sidelines and promote school spirit by designing and purchasing Rocket mascot costumes. The first version (on top) ...well...not sure what that is, but I would not want to be inside that thing. A vision of a "Rocket" is not the first thing that comes to mind.

The Booster Club seems to agree and updated the costome to the current vertsion (on the bottom).  If you want to read about how it all came to be click HERE.

If we had this guy back in the day, which classmate do you think would be Rocky Rocket? 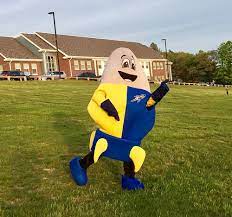 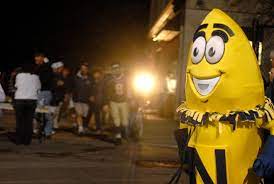